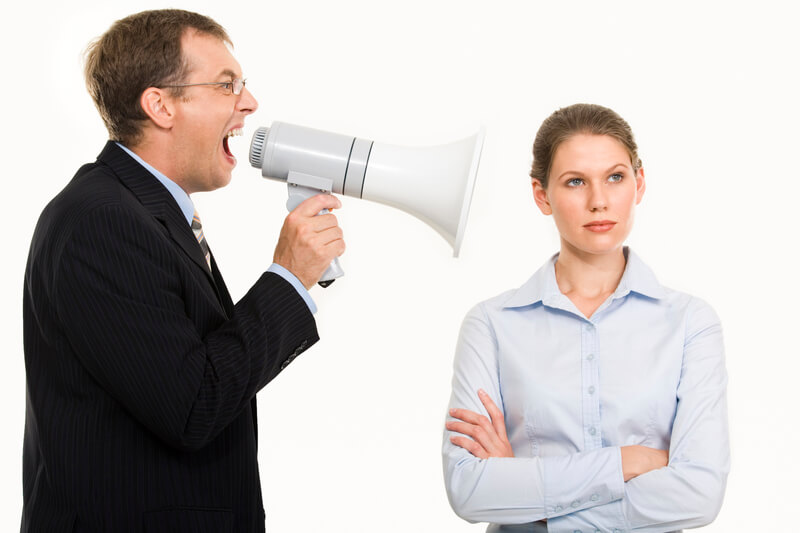 How To Handle Childish Behavior At Work

My client Heather called to say she hadn’t received our shipment of books. So our operations manager investigated and discovered that the shipment had been delivered and signed for by Sarah Sutton. So we called Heather back, told her that the 50 books were delivered to Sarah by mistake, and asked if she could retrieve them from Sarah’s office.

“Hmmm. . . . Our operations manager continued: “Sarah said she’s just down the hall from you and would be happy to hold them until you get a chance to walk down and get them.”

“Well, we can do that,  . . . but you’ll be delayed in getting your books—and there’ll be additional shipping charges.”

“Do what you have to do,” Heather said. “Sarah shouldn’t have signed for them. That’s her problem.”

Result: We called Sarah back, asked her to return the books to us, and then initiated a completely new shipment and sent them back to the same address—3 offices down the hall. The books arrived late to the customer at double the shipping cost.

Spotting such childish behavior is easy enough; stopping it takes skill. Those coworkers, customers, and bosses who have decided not to “adult” at work (borrowing this noun-turned-verb from Millennials) create drama, back-stabbing, hostility, and often micromanagement.

Temper might involve angry outbursts, “dressing down someone” in front of a group, cursing, quick exits from a meeting, slamming doors, or any number of attention-getting disruptions. The message sent by these temper tantrums is “I’m angry and I intend for you to fall in line and accept my way or my opinion—or you’ll pay for it!”

Best Response: Ignore the tantrum as much as possible. Don’t cower. Don’t respond with hostility. Simply remain in your adult state of mind and recognize the behavior as an attempt at manipulation. Carry on with your conversation or plans.

This behavior frequently surfaces in meetings: Someone withdraws if things aren’t going their way. They may or may not show up at all for the next meeting.

In addition to nonparticipation in meetings, pouting bosses or coworkers attempt to let their team members know they’re angry or “hurt” by withholding information or praise, and going out of their way to avoid physical contact:  No small talk. No eye contact. No feedback of any sort. Like babies, their pout is an attempt to “hold their breath until they turn blue” and force you (the parent) to notice.

Best Response: Ignore the pout. Continue to attempt to interact with them as you routinely do. Noticing and commenting on their pout rewards such behavior. When they understand that their pout has not gotten them the intended attention and “What’s wrong?” question, they’ll eventually stop and let it go. Or they’ll state clearly what’s bothering them so you can have a productive conversation to resolve the issue.

If you have toddlers in the family, then you’ve seen babies who need food or sleep. They’re simply whimpering, hanging on a parent, rubbing their eyes, or chewing their fist. They don’t know exactly what they want—but they need things to change fast.

Childish coworkers, clients, and bosses do the same: They whine about the workload, the “unnecessary” paperwork, “unfair” performance metrics, traffic, and leaves on the sidewalk. They’re seeking sympathy.

Best Responses: 1) Congratulate them for handling/surviving “such a tough situation.” 2) If they continue to whine, simply acknowledge the complaint: “Yes, that client does push lots of paperwork our way.” Then change the subject. 3) Call them to accountability with a statement like: “What are you going to do about this?” Repeat that question as necessary—until they grow embarrassed at their own repetition and non-action.

These people consider equipment, information, processes, plans, or data theirs and theirs alone. Your request for information is met with “Why do you need to know that?”

Best Response: 1) Post “guidelines” on equipment or for processes. 2) Ask directly and clearly for what you need. 3) State directly what will or won’t work if the team is to succeed. 4) Keep any necessary follow-up on a project in your court. That is, don’t expect or depend on them to voluntarily cooperate or meet deadlines. Make sure the next action is always yours: “If I don’t hear from you by May 1, I’ll assume X and move ahead to do Y.”

Tattlers throw others under the bus at the least provocation. You can easily read between the lines when you get emails like this: “Just letting you know that our proposal to VIP Client will not go out on Friday as planned. The graphics department had some staffing issues and was unable to send us the images we requested a couple of weeks ago. After we get the new images/logo from them, I’ll let you know when the proposal leaves our office.”

At other times, the tattling is more direct: “Ross never showed up at the tradeshow booth. We never heard from him. So Miriam and I had to do a double-shift on Tuesday.”

Best Response: Investigate.  If the tattler’s woes are one-sided and inaccurate, provide the correct information to the tattler rather than simply “letting it go.” If the situation needs to be addressed, give the person involved a chance to explain what happened. Don’t assume guilt or innocence. Simply ask open-ended questions about the situation.

If the situation involves an entire team, raise the question in a group setting and ask coworkers to set guidelines or suggest solutions.

Coworkers often become friends. They’ll arrange to go to lunch together, engage in chit-chat in the breakroom, and share photos of their vacation. But when “best friends forever” become cliquish and exclude others, that’s harmful to morale and productivity.

Best Response: Don’t try to pry your way inside their tiny circle. They’ll simply push back all the more—just like they did in junior high when a coach tried to force them to allow others to “play.” Simply find another friend or group to join. Rather than isolating themselves inside a clique, mature adults understand that they learn and grow by associating with a wide circle of friends and coworkers.

For the sake of success and morale, aim to get team members to “adult” and outgrow childish ways.

Learn more ways to set yourself apart and be noticed with Communicate Like a Leader: Connecting Strategically to Coach, Inspire, and Get Things Done