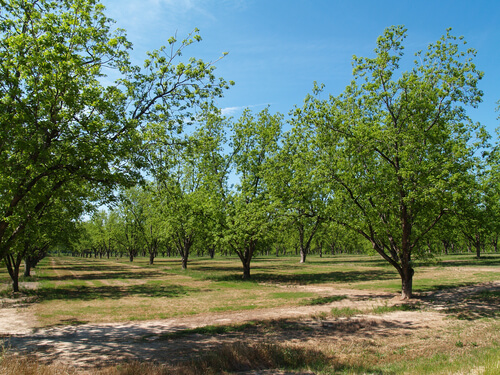 “You have a lot of trees back here,” I said to my husband one Sunday afternoon in his backyard after we’d been dating only a few months.

“I thought you were going to be moving shortly?”

“So how long does it take them to grow—won’t you be moved before they’re big enough to give you any shade?”

“Probably.  But somebody’ll enjoy them after I’m gone.”  He moved the water hose over to a new base of roots.  “I always plant trees wherever I live. Did I tell you about the man who helped me set all these trees out?”

I shook my head, and he related the following story.

Vernon sat watching the old man eat his fried chicken with relish, dabbing his napkin at the corners of his mouth as an afterthought for the sake of onlookers. With his battered luggage under the table beside him, it was obvious the elderly diner had walked over from the bus station across the street. The old man lingered over his cup of water, simply watching other diners as they came and went, occasionally moving his bag from side to side to prevent someone’s tripping as they passed.  He seemed amused by the children flying airplanes over the plates while their parents coaxed them to eat.  The twinkle in his eye seemed to reveal memories of family days gone by.

Vernon said to the older man across the narrow aisle,  “Are you visiting someone here in Kingwood?”

“No.  Just passing through.”

“Where are you from?”

“Philadelphia.”  He paused for a moment, as if to assess Vernon’s real interest in his itinerary.  Obviously deciding it was a genuine interest, he elaborated.  “My wife died a few weeks ago. Been married 52 years.  Decided I needed a change.  Got all my belongings here in this case.” He patted the bent brown bag as if it were a collie dog. ”Yeah, going out to live with my son.”

The old man’s response was one of those thumb-nail sketches that wallop you up beside the head with the same kind of impact you sometimes get from a novel or movie.

“So where’s your son live?”

“He’s out in San Diego—or somewhere near there. That’s where he’s meeting my bus.”

“Nice place.” Vernon started to get up to pay his check.  “So are you going to have time to see a little of the city before you go?  They’ve got some great walking trails near here.”

The old man shook his head.

“So what time does your next bus leave?”

“Bus is not the best way to travel. But it’s cheap,” the old man smiled, not at all bitterly.

“So why don’t you come on home with me for the afternoon, and I’ll bring you back to catch your bus at 10:00? That’s too long for you to have to sit here and wait.”

The old man seemed to search his face for sincerity.  “I wouldn’t want to impose. I could just sit here probably another couple hours and then mosey on back over to the bus station.”

“No, that won’t be comfortable.  I don’t live far away.  Got a little garden home.  I wasn’t planning on doing anything special—just planting a few trees.  I could use some help.”

The old man’s face lit up.  “Oh, now that—yeah, I could help you do that. I know about planting trees.”  And with that, he reached for his bag and followed him out of the restaurant.

Once in the backyard, after Vernon had given him some of his own old work clothes to change into, the old man seemed much younger.  “If you want some advice, I’d tell you to stagger those trees,” he said as Vernon was about to dig the second hole. “Like this.”

The visitor took the extra shovel and began to mark the spots across the back lawn.  When he returned to where Vernon was standing, he gave him the reason:  The roots don’t crowd each other and the resulting shade from the canopy will be wider.”

“I see,”  Vernon said appreciatively. “Nobody ever told me that before. Makes sense. Let’s do it then.”

They set out nine trees before dark. In between, they spread their lives.

When they’d finished, Vernon showed him to the extra shower so he could clean up and change back into his traveling clothes.  He took him out for dinner on the way back to the bus station for his ten o’clock departure.  As they parted, they exchanged phone numbers and vowed to keep in touch.

But he never heard from the man again.

Four years later, Vernon received a letter from the old man’s son, telling him that his father had recently passed away. In part the letter said:  “My father never stopped talking about you and your kindness to him that Sunday afternoon.  He was truly amazed that in this day and time someone would invite him as a stranger into their home—and make him feel useful. That was the best part. I found your address in his room and thought I should let you know what your kindness had meant to him.  He talked of you and that day often, as if you were old friends.”

As I recall this incident now years later and reflect on this season, I pose this question: Do we live in a country and culture where things like this still happen?