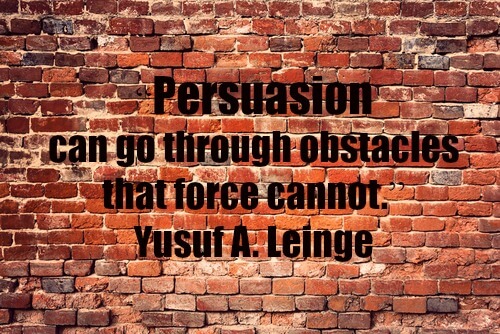 I’m guessing not a week passes that you don’t need to persuade someone to do something or change something. Just this week, my persuasive communication included asking for an extension of a gift card expiration date, requesting reimbursement of a client travel expense previously denied, getting an appointment changed to a more reasonable time, and negotiating a new arrangement with a supplier.

So when needing to work out a mutually rewarding deal—or simply change someone’s mind on a social or personal issue––I try to keep some of these favorite comments in mind:

―“Character may almost be called the most effective means of persuasion.”––Aristotle

― “If you wish to win a man over to your ideas, first make him your friend.”––Abraham Lincoln

― “If you would persuade, you must appeal to interest rather than intellect.”––Benjamin Franklin

― “One of the best ways to persuade others is with your ears––by listening to them.”––Dean Rusk

― “Persuasion can go through obstacles that force cannot.”―Yusuf A. Leinge

― “People are usually more convinced by reasons they discovered themselves than by those found out by others.”––Blaise Pascal

― “I don’t know the rules of grammar. If you’re trying to persuade people to do something, or buy something, it seems to me you should use their language.”––David Ogilvy

― “I would rather try to persuade a man to go along, because once I have persuaded him, he will stick. If I scare him, he will stay just as long as he is scared, and then he is gone.”––Dwight D. Eisenhower

― “It’s true what they say, that words are the true weapons. Those who fight with steel are limited to the strength of their arm, the reach of their blade, and the timing of their strike; but those who fight with persuasion know no limits––not time, nor status, nor chance.”
–– A.J. Darkholme

― “If you need to invoke your academic pedigree or job title for people to believe what you say, then you need a better argument.”––Neil deGrasse Tyson

––“The real persuaders are our appetites, our fears, and above all our vanity. The skillful propagandist stirs and coaches internal persuaders.”––Eric Hoffer

––“A single question can be more influential than a thousand statements.”––Bo Bennett

––“You cannot antagonize and influence at the same time.”––John Knox

(The list summarizes 9 key principles from the new book What More Can I Say? Why Communication Fails and What to Do About It by Dianna Booher, published by Penguin Random House/Prentice Hall.)