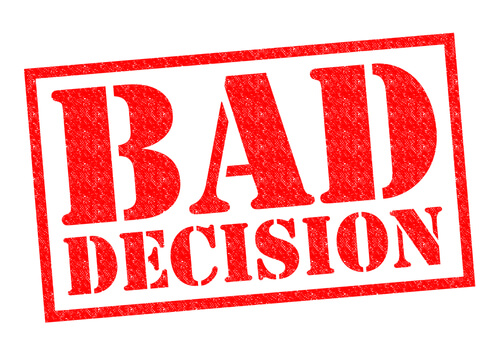 Ever find yourself in an organization or on a team that’s struggling because of a leader’s poor decision? You sit back and reflect on the leader personally and wonder why a savvy, experienced, and ordinarily capable person could make such a dumb decision—one that wrecks a project or destroys the morale of so many people.

The leader himself or herself may actually be scratching their head wondering the same thing:  Where did I go wrong? Where did I miss the signs that this decision would sink the ship so fast?

Analyze such situations—from the typical week’s projects in your organization to the huge scandals in the news––and you’ll find these common causes:

“Been There, Done That” Syndrome

When faced with new situations, leaders sometimes inadvertently shortcut their decision-making skills by shoving the issue into the same category as previous problems. But they have faulty memories. The situation isn’t the same. Eastman Kodak comes to mind. When faced with photography moving to the digital world, their leadership team at Kodak refused to believe it really was a new technology—that the industry really would change so dramatically. They thought they’d lick the competition like they had so many other times before.

Some leaders continue to think every new challenge is simply a new version of an old challenge they’ve overcome. Result: The problem swallows them—and sometimes their entire organization––before they realize it.

I recently discussed a pervasive problem with a senior leader, and suggested that he survey representatives of the various departments to get feedback on the situation—a decision he’d made that frankly was being widely ignored or circumvented throughout the organization. His response:  “Look, I already know what they’ll say. Anyway, you only get negative feedback on a survey.”

Currently, he has done nothing to right the ship and the organization has largely ignored his directive. The ship is taking on water fast; he’s climbing to a higher deck, and pretending not to notice.

Self-Interest Above the Common Good

Some savvy leaders look out for the team, department, or organization—up to a point. But when the common good clashes with what’s best for them personally, the tide turns. Of course, to a degree, everyone has their self-interest in mind. Otherwise, they’d never ask the salary when they accept a job, underprice their services or product as a seller, and never expect a raise or promotion.

At question here is inappropriate self-interests: Lying, withholding information that sabotages a project, blaming others, refusing to own up to mistakes, or taking credit for others’ work or ideas.

A leadership position, however gained, grants power.  And power feeds ego. Leaders begin to believe their own “press”—that they are actually the smartest person in the room.  Many leaders surround themselves with people who continually reinforce that concept. Their information comes to them filtered through sycophants. Before long, these leaders lose touch with reality.  So obviously, the decisions they make may or may not reflect the reality of a situation.

A few years ago, a general manager (call him Tim) bragged of his resignation from an organization:  “Although I’m leaving for a better opportunity, in some ways I feel bad about going. So many people are upset at my resignation. I look for several of them to resign because I’m leaving.”  Reality check:  Nobody resigned. The CEO reports that the company has continued to grow without that general manager.

Perceptions become distorted when leaders hear only from those they choose to surround themselves with as supporters.

How Leaders Course-Correct After a Poor Decision

Smart decisions come from smart leaders committed to communicate with those up, down, and laterally to stay grounded in reality.