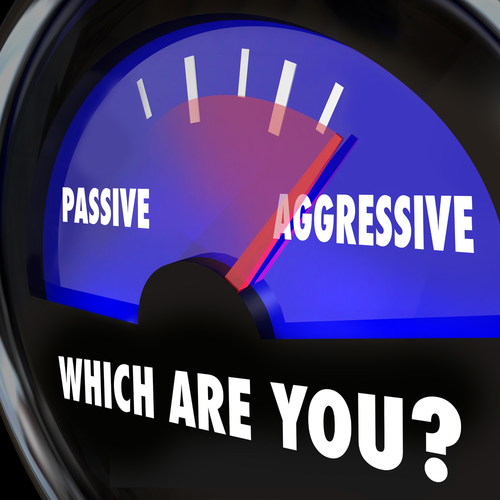 5 Ways to Communicate With a Passive-Aggressive Person

Janet wore a smile from the nose down; her eyes bore daggers. If I offered a Friday afternoon off for having finished a big project early, she “wished” it had been last week when she and her husband were headed out of town for the football game.

When I ordered in pizza for everyone’s lunch to celebrate a staff anniversary, she had “hoped” for barbecue.

When I congratulated a three-person team on finishing a custom course our client had raved about, Janet dropped a note on my desk “just FYI” that her coworker Amy didn’t have anything to do with it—that she herself had completed the major part of the project without help.

When I announced that our company would continue to pay healthcare premiums for all employees, she smiled and “guessed” she’d be “penalized” because she already had coverage through her husband’s firm and would just “lose” that benefit that others in the company received. So I offered her the premium equivalent in cash. A few weeks later, when her husband lost his job and along with it his health coverage, Janet was back in my office asking for health coverage “like everyone else.”

Such is the scene in dealing with passive-aggressives.  Recognize this behavior around your office?

These individuals appear to act appropriately in any given situation––but they actually behave negatively and resist passively.  They often play the “victim.” Their passive-aggressive actions can range from mild to extreme.

Mild resistance:  making excuses for not doing, “forgetting,” blaming, “misunderstanding,” “teasing” remarks to hurt or let you know how they feel

In other words, they fear openly and directly communicating with you.  So they communicate their resistance covertly. And dealing with them is sheer misery—much like dealing with a terrorist. You never know when they’re about to strike—until the damage has been done.

Here’s a letter from one of my blog readers who has experienced this misery:

I have dealt with something I have seen little written about. In my last church and the one I am in presently I had someone under me who was VERY passive aggressive. I had NO idea how much harm someone like this can do. Both of them were unexplainable.

In my last church I realized that PA behavior was something that she did so subtly I didn’t realize it at first. The most recent one was a struggle to deal with, but she threw me under the bus as she was leaving for another church. It became such an issue that I called a guy in a church she served in Florida and he said she exhibited the same behavior there. At least it made me not feel like I was going crazy.

My current pastor asked me to make sure she knew I was her “boss.” (She told me he was her boss. I asked who her supervisor was when the last guy was here and she said “Pastor Ryan.”)  From that point, it went downhill. I had no idea the havoc these people can cause!

Have you dealt with this much in any of your writings? I am finding it more prevalent when talking to others. And we are in church work!! I can’t imagine the “real world.”

I would love to read up on this more AND I would really like to know how to spot them in the interview process. (Both ladies were there when I was hired). Honestly, it was so bad that I never want to have to deal with it again. The CRAZY thing is most people can’t spot them!!! I had not seen this before in other places.

Sounds like a good title for a new book “Your Coworker May Just Be Passive Aggressive”!!

Thanks for all you do.

Here’s help in dealing with such an individual:

If none of the above techniques work and you control the situation, you may have to end the relationship.  If you must continue to interact with this person, keep your distance as much as possible and maintain your composure while dealing with this challenging personality.

After all, leadership includes such challenges—covert hostility as well as open conflict.

Having communication problems lately? Download a free chapter of What More Can I Say? Why Communication Fails and What to Do About It by Dianna Booher(Penguin Random House/Prentice Hall)