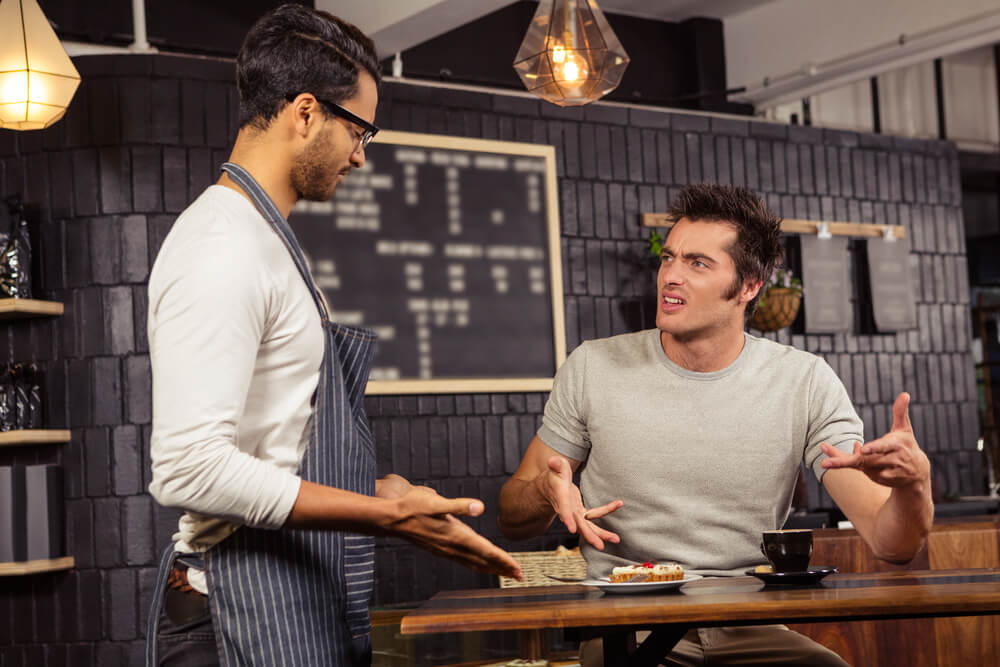 5 Ways to Cool Off a Hot-Headed Customer or Coworker

Six colleagues and I sat huddled in an impromptu meeting before a general session. Someone raised the question of how to generate a bigger attendance at our regular meetings. As we tossed out various ideas and discussed the pros and cons, a stranger walked up and seated himself at our small table.

Our leadership team paused momentarily, nodding in his direction, thinking that he possibly was an early attendee for the session to follow in that room.  Since our discussion was not confidential, we continued.  After all, it seemed rude to tell him to “go away.” And our group had decided to borrow the room for this brief discussion while it was unoccupied.  We assumed that the stranger would figure out shortly that he’d wandered into a private meeting and get up and leave.

He sat there for about five minutes, listening. Then suddenly, he stood to his feet, stepped back from the table, shoved his chair under the table, and said, “I’m leaving! And I won’t be back! I came for a meaningful session. This is NOT what I expected!  Sitting here discussing how to get more members is a HUGE waste of my time!”

He stormed out of the room before anyone could explain that we were not part of a formal breakout session.

Hot-heads may explode with or without reason. And you may or may not need or want to calm them down—for your benefit or theirs.  But the very worst thing you can do is say, “Calm down.” That command is like tossing gasoline on fire.

Here are alternatives to talk them back from the edge:

I know, I know. The very last thing you want to hear is a repeat of the tirade. But that’s the point–they won’t be able to repeat the performance. After a big emotional display of anger, they lose their energy and passion for venting. So the second time through the story, they tend to state things in a more rational, detailed, calm way so that you get the full story of what has happened to create the problem.

If the hot-head is still in an emotional rage, ask a factual question about something they’ve said or about the situation: “What time did you say it was when the repair person called you back yesterday?”  “Was the equipment on sale when you first saw it?”

Asking straightforward questions like this breaks their train of thought to focus on specific details. That in itself helps them to calm down and refocus.

Their seeing you jot notes communicates that you’re listening. A key reason they rage, yell, curse, and generally explode is to get attention—to force someone to listen. Note-taking reflects the physical act of hearing.

Always let the other person go first. You may be surprised how often they simply want someone to show concern and apologize. Even when you or your team didn’t cause the problem or make the mistake, you can always express regret for a situation or outcome.

When dealing with a hot-head, the cool approach lessens your stress.