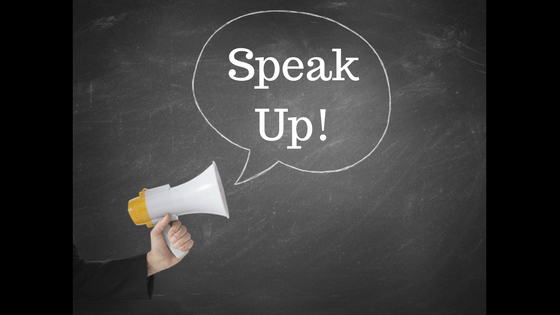 How to Speak Up & Find Your Voice As a Leader

Chances are that as children, Donald Trump, Hillary Clinton, and Barack Obama watched and admired a parent or another close relative speak their mind and take charge of difficult situations. The inclination to speak out on issues and the ability to influence others to act involves the will and the skill. You can increase both by observation, reflection, and practice.

How to Speak Up As a Leader: 5 Tips to Find Your Voice

Start with Empathy and Encouragement

Do you know someone or some group going through challenging times? It’s a rare team or person who will reject your encouraging words and empathy. Let them know you understand their puzzlement, injustice, or loss—or ask them to tell you more about it and listen so you can ask even more specifics and listen longer. They’ll walk away from the encounter thinking you’re the most brilliant conversationalist they’ve ever met.

Identify Your Passion and Purpose

Practice in a Safe Zone

If you’re naturally an introvert, you probably won’t make your first forum a political rally, with hecklers in the crowd. Try your wings by expressing your controversial opinions to friends whom you know will disagree. As you build confidence at holding your own with friends on confrontational topics, then voice your opinion to a colleague you don’t know well. These first two steps will increase your confidence to speak up in large groups about controversial ideas.

Keep in mind that confidence to speak up doesn’t equate to expertise or influence. As you communicate your ideas and opinions, phrasing matters a great deal. Word choice, tone, body language—all these communicate an attitude toward your listeners. As a leader, make sure that your communication style doesn’t detract from the message or idea. Many a good idea has been rejected because groups disliked the messenger—his or her arrogance, presumptions, or biases.

Whether true or not, the story is told about evangelist Charles Spurgeon that he wrote on his sermon notes on one occasion: “Weak point. Yell louder.” Nothing builds a team’s confidence in a leader like competence. When you speak up, know whereof you speak! Gather information from valid sources, analyze it, draw conclusions, and then speak up.

But don’t overlook a key step at this point: Pass along your reasoning! Leaders make a big mistake when they simply announce a decision and expect their team to support it. Sure, they may have spent hours gathering and analyzing data. Their decision may be the perfect one. But people will follow more confidently and quickly if they hear your reasoning.

No matter your title, to increase your influence, speak up to move up!