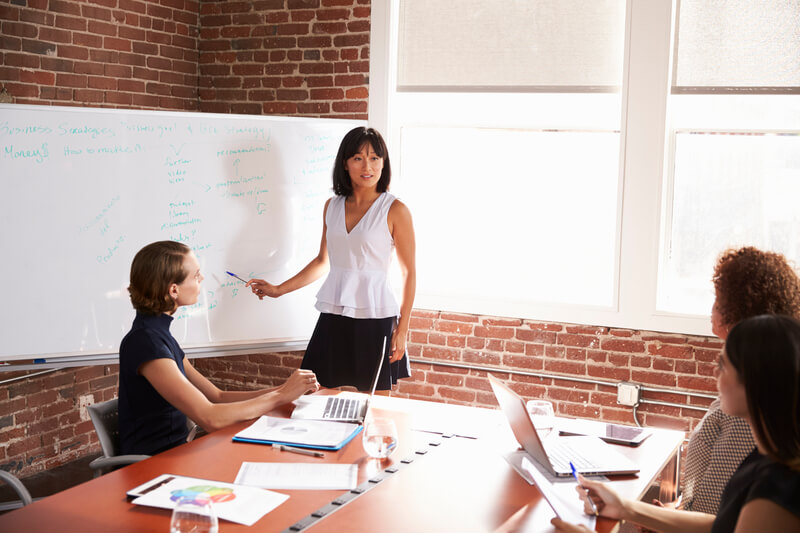 How to Get C-Suite Buy-In

“Never heard back on that.” “They never took serious action on my recommendation.” “Sure would like to have a seat at the table when that discussion comes up next time!” All of these are common laments from those who’ve had their day in front of C-suite decision makers—and for some reason left defeated and ultimately disappointed.

After more than three decades of listening to executives critique briefers, I have a long list of do’s and don’ts for coaching clients as they head into the C-suite—either at their own organization or at a client site. Either their internal recommendation goes into a big black hole never to surface again, or their sales presentation failed to make the cut.

So whether you’re making a formal presentation or simply engaged in conversation, what does it take to gain buy-in at the executive level? Seven tips here:

How to Engage C-Suite Executives

Talk about Profitability, Not Just Revenue and Growth

Salespeople tend to focus on revenue because that’s typically what generates their commissions and bonuses. Marketing teams and operational support folks focus on growth because that’s easy to measure. But C-suite leaders concern themselves with expenses as well as revenue and growth. That ratio translates to overall profitability—or not.

In fact, increased revenue and growth—with no control on related expenses—can drive an organization into bankruptcy! So if you want to speak the language of executives, talk about profit margins.

Answer the “So What?”

Some professionals are so steeped in their functional roles and jargon that they expect the facts to speak for themselves. They rarely do. The savvy communicator adds the “so what” to the conversation. For example: “We’ve had a reject rate of less than 2 percent on this latest model rolling off the assembly line so what that means is we should be able to shave more than $800K off our projected budget for rework.”

Turn topics into takeaways. Cut the verbiage. Simplify the graphs. Executives have many decisions, problems, and projects in their pipeline. They don’t have time to decipher the meaning of a slide deck of charts and graphs with a heavy load of data. So title the slide with the key takeaway, not just the vague topic: What point are you making with the slide?

Likewise with graphics: Don’t dump all the possible data you can display onto one slide. It’s far better to prepare three slides to make your three key points than to make one complex slide that requires three minutes for your executive to digest.

Even generals try not to fight on all fronts at once. If you have crises on all fronts of the organization, be selective about timing so that you have the executive’s full attention for your message.

Have Data But Never Depend on It

Executives like to know there are metrics to support what you say or recommend—they just don’t always want to hear them. Taking your C-level officers through all the evidence can try their patience. They’re expecting you to do your job and draw conclusions that spring from that research.

Always have support for your recommendation, but never expect data alone to make your case.

Perfect the “Big Picture” With Storytelling

Add the human dimension. Given your data, your research, your interviews, and your expertise on the subject, what’s the impact?  What’s the story you’re telling? Tell the C-suite officer how this change, this policy, the budget increase, this move, or this marketing campaign will affect people—employees, customers, the general public. What’s the long-term effect or potential opportunity? Give them a visual picture.

Never walk away from the conversation or briefing without suggestions for next actions. It’s typically a good idea to provide these next steps on a leave-behind so the C-suite executive can delegate the action after the “go” decision.

With these seven steps to gain buy-in, you’ll dramatically increase your chances that your next briefing or conversation with C-suite decision makers gets attention—the right kind.

For 20 specific characteristics, habits, or traits that help you increase your credibility and confidence in the C-suite, download Dianna’s Executive Presence Checklist, excerpted from her book Creating Personal Presence.

7 Tips to Prepare for the Big Job Interview

There’s more to a job interview than showing up on time. Much more. After my client Melissa...